There are only two kinds of languages: the ones people complain about and the ones nobody uses. — Bjarne Stroustrup

This can be a long article, even tedious. It’s caused by a topic of process.nextTick. Javascript developer may face to setTimeout, setImmediate, process.nextTick everyday, but what the difference between them? Some seniors can tell:

At the very beginning, I’ve tried to search answers from Node official docs，and other articles. But unfortunately, I couldn’t access the truth. Other explaination can be found in reddit blackboard, 1, 2 and the author of Node wrote an article try to explain the logics.

I can not tell how many people know the truth and want to explore it, if you know more information, please contact me, I’m waiting for more useful information.

This article is not only about event loop, but also something like Non-blocking I/O. The first thing I want to say is about I/O Models.

Operating System’s I/O Models can be divided into five categories: Blocking I/O, Non-blocking I/O, I/O Multiplexing, Signal-driven I/O and Asynchronous I/O. I will take Network I/O case for example, though there still have File I/O and other types, such as DNS relative and user code in Node. Take Network scenario as an example is just for convenience.

Blocking I/O is the most common model but with huge limitation, obviously it can only deal with one stream (stream can be file, socket or pipe). Its flows diagram demonstrated below: 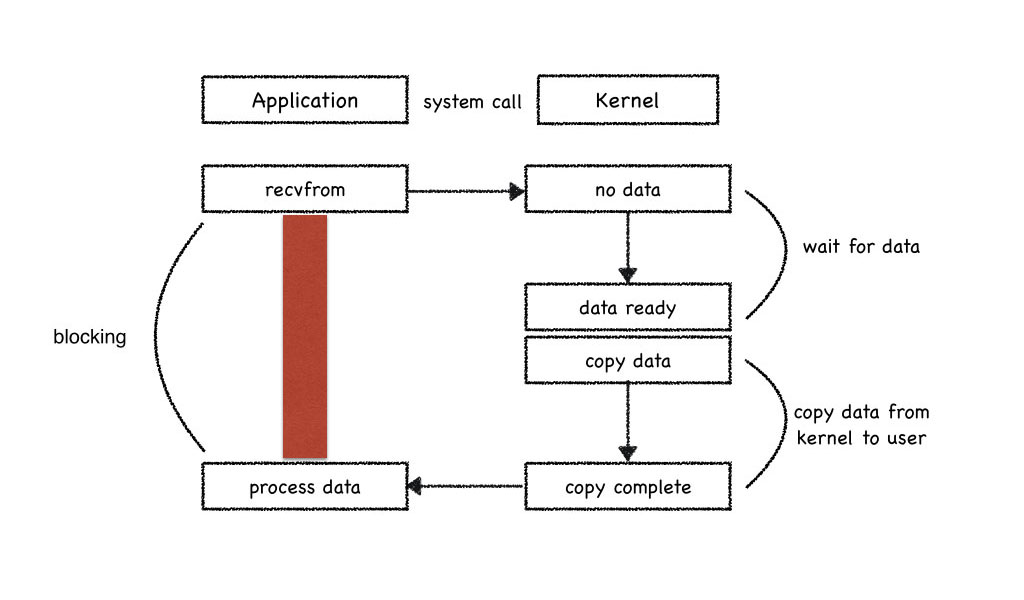 Non-Blocking I/O, AKA busy looping, it can deal with multiple streams. The application process repeatedly call system to get the status of data, once any stream’s data becomes ready, the application process block for data copy and then deal with the data available. But it has a big disadvantage for wasting CPU time. Its flows diagram sdemonstrated below: 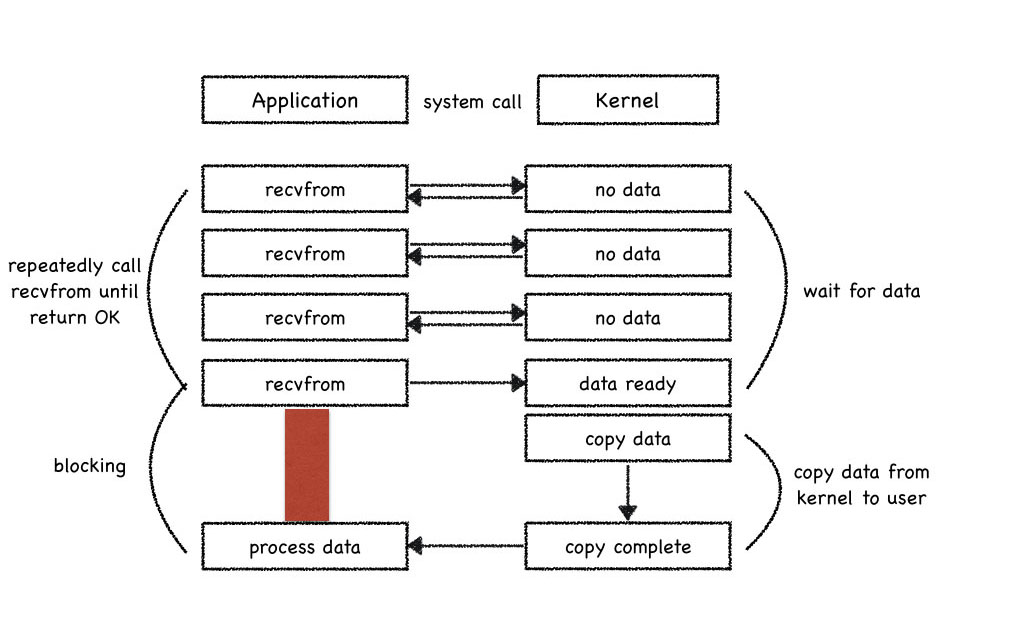 Select and poll are based on this type, see more about select and poll. I/O Multiplexing retains the advantage of Non-Blocking I/O, it can also deal with multiple streams, but it’s also one of the blocking types. Call select (or poll) will block application process until any stream becomes ready. And even worse, it introduce another system call (recvfrom).

Notes: Another closely related I/O model is to use multi-threading with blocking I/O. That model very closely resembles the model described above, except that instead of using select to block on multiple file descriptors, the program uses multiple threads (one per file descriptor), and each thread is then free to call blocking system calls like recvfrom.

Its flows diagram demonstrated below: 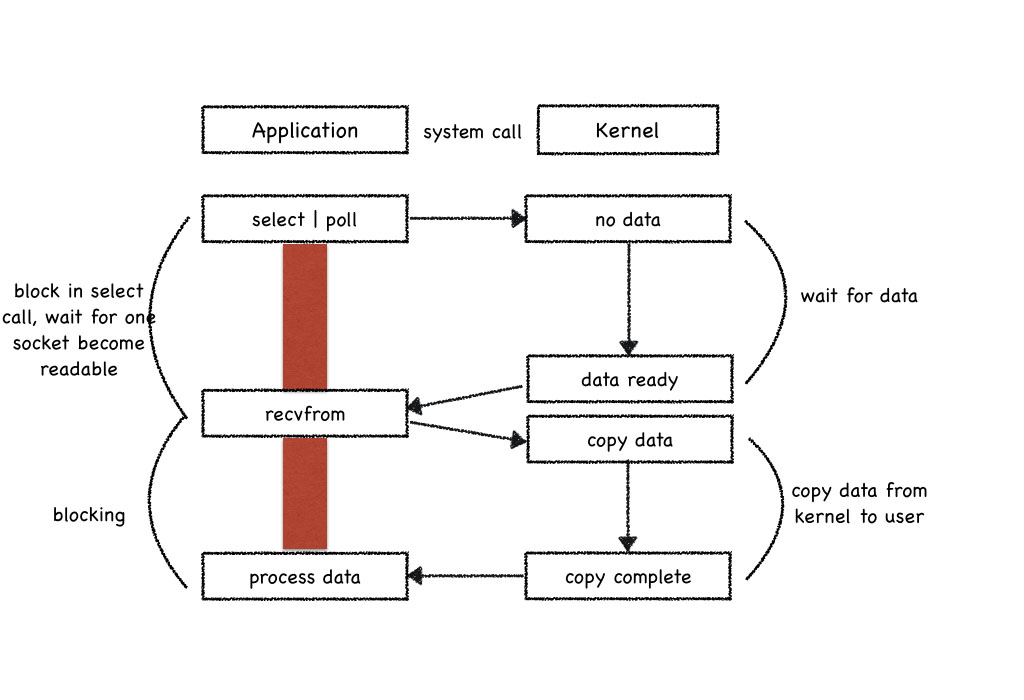 In this model, application process system call sigaction and install a signal handler, the kernel will return immediately and the application process can do other works without being blocked. When the data is ready to be read, the SIGIO signal is generated for our process. We can either read the data from the signal handler by calling recvfrom and then notify the main loop that the data is ready to be processed, or we can notify the main loop and let it read the data. Its flows diagram demonstrated below: 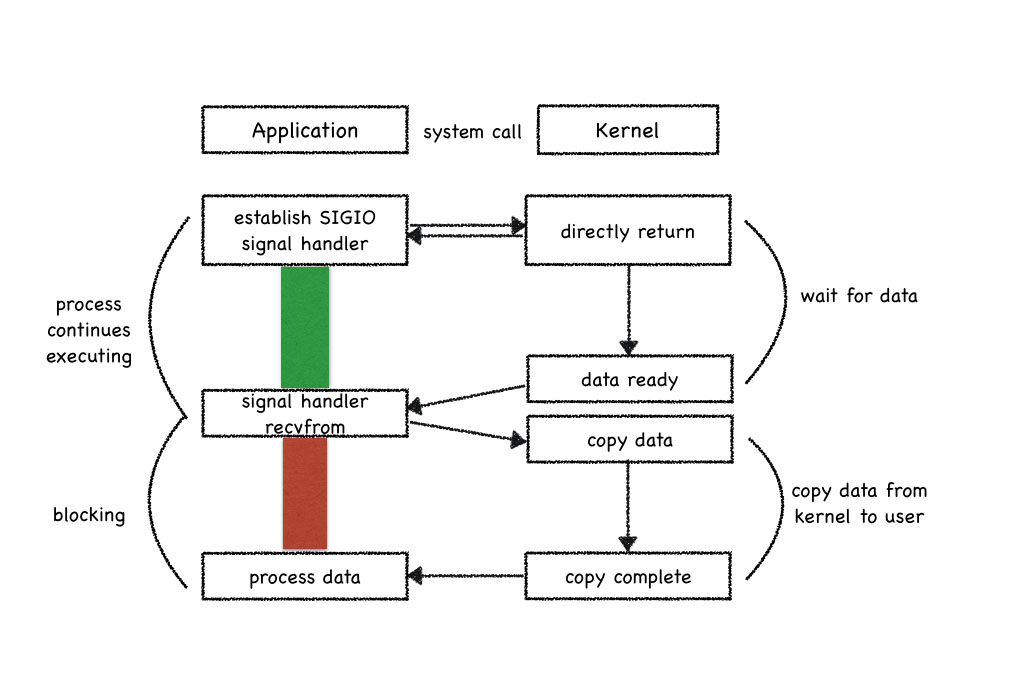 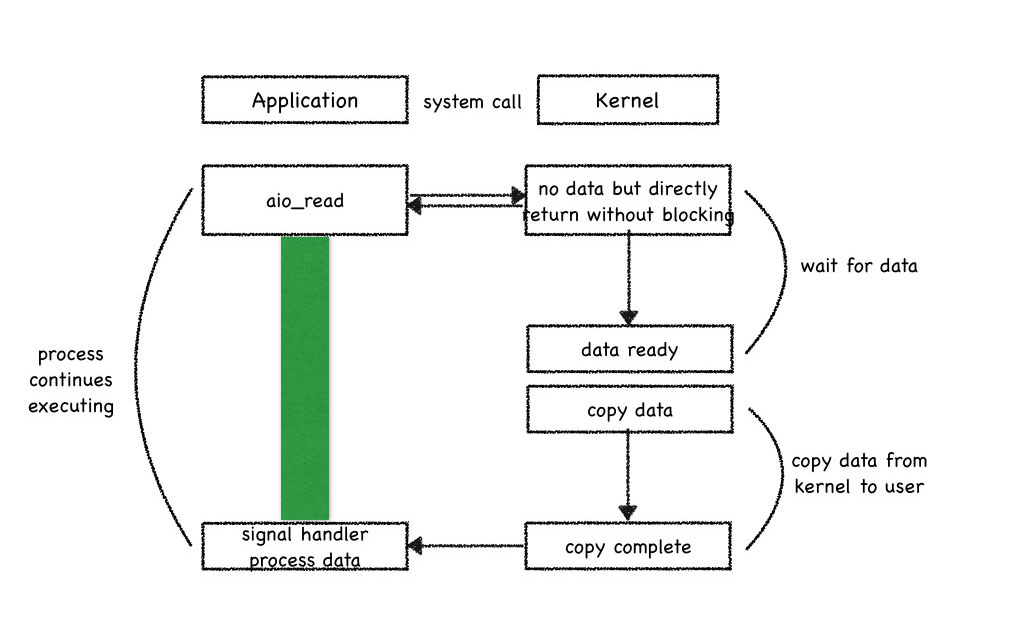 After introduced those type of I/O models, we can identify them with the current hot-spots technologies such as epoll in linux and kqueue in OSX. They’re more like the I/O multiplexing model, only the IOCP on windows implement the fifth model. See more: from zhihu.

Then have a look at libuv, an I/O library written in C++.

libuv is one of the dependencies of Node, another is well-known v8. libuv take care of different I/O model implementations on different Operating System and abstract them into one API for third-party application. libuv has a brother called libev, which appears earlier than libuv, but libev didn’t support windows platform. This becomes more and more important while Node becomes more and more popular so that they must consider of windows compatibility. At last Node development team give up libev and pick up libuv instead.

Before we read more about libuv, I should make a tip, I have read many articles and guides who introduce the event loop in JavaScript, and they seem no much more difference. I think those authors mean to explain the conception as easy as possible and most of them do not show the source code of Webkit or Node. Many readers forget how the event loop schedule asynchronous tasks and face to the same problem when they encounter it again.

The most important API in libuv is uv_run, every time call this function can do an event loop iteration. uv_run code shows below (based on implementation of v1.8.0): 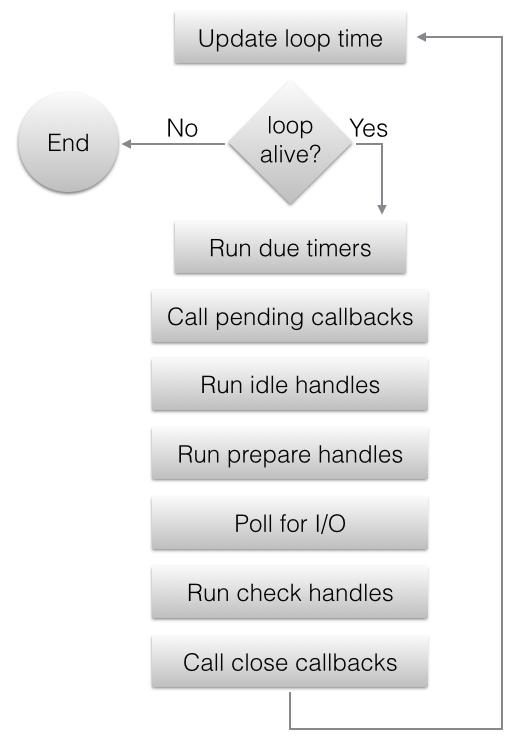 As libuv described the underline principle, timer relative callbacks will be called in the uv__run_timers(loop) step, but it don’t mention about setImmediate and process.nextTick. It’s reasonable obviously, libuv is lower layer of Node, so logic in Node will be taken account in itself (more flexible). After diving into the source code of Node project, we can see what happened when setTimeout/setInterval, setImmediate and process.nextTick.

Node is a popular and famous platform for JavaScript, this article don’t cover any primary technology about Node which you can find in any other technical books. If you want to, I’m willing to recommend you Node.js in Action and Mastering Node.js.

All Node source code shown in this article based on v4.4.0 (LTS).

When setup a Node process, it also setup an event loop. See the entry method StartNodeInstance in src/node.cc, if event loop is alive the do-while loop will continue.

Timers are crucial to Node.js. Internally, any TCP I/O connection creates a timer so that we can time out of connections. Additionally, many user user libraries and applications also use timers. As such there may be a significantly large amount of timeouts scheduled at any given time. Therefore, it is very important that the timers implementation is performant and efficient.

Notice the constructor of TimersList, it initialize a TimerWrap object, which build its handle_ field, a uv_timer_t object. The snippet from src/timer_wrap.cc show that:

Then the TimerWrap designate the timeout task to its handle_. The workflow is simple enough that Node do not take care of what time exactly the timeout callback get called, it all depends on libuv’s timetable. We can see it in the Start method of TimerWrap (called from client javascript code), it invoke uv_timer_start to schedule the timeout callback.

Back to the figure above in libuv section, you can find in each event loop iteration, event_loop can schedule the timeout task itself, with update the time of event_loop, it can accurately know when to execute the OnTimeout callback of TimerWrap. Which can invoke the bound javascript functions.

Dive into libuv source code, every time uv_run invoke uv__run_timers(loop), which defined in deps/uv/src/unix/timer.c, it compares the timeout of uv_timer_t and time of event_loop, if they hit each other then execute the callbacks.

Notice about the uv_timer_again(handle) code above, it differs the setTimeout and setInterval, but the two APIs invoke the same functions underline.

Node did most of the same job with setTimeout when you write javascript code as setImmediate(callback). Definition of setImmediate is also in lib/timer.js, when call this method it will add private property _immediateCallback to process object so that C++ bindings can identify the callbacks’ proxy registered, and finally return an immediate object (you can think it as another timeout object but without timeout property). Internally, timer.js maintain an array named immediateQueue, which contains all callbacks installed in current event loop iteration.

At last, we dive into CheckImmediate, notice the immediate_callback_string method will return string: “_immediateCallback”, that we have seen in timer.js.

So we knew that, in every event loop iteration, setImmediate callbacks would be executed in the uv__run_check(loop); step followed uv__io_poll(loop, timeout);. If get a little confused, you can back to the diagram in event loop iteration execute order.

process.nextTick might have the ability to hide its implementation ^_^. I have issued that for node project to get more information. At last I closed it myself because I thought the author got a little confused about my question. Debug into the source code also make sense, I add logs in the source code and recompiled the whole project to see what happened.

The entry point is in src/node.js, there is a processNextTick method that build the process.nextTick API. process._tickCallback is the callback function must be executed properly by C++ code (or if you use require('domain') it would be override by process._tickDomainCallback). Every time you called process.nextTick(callback) from your javascript code, it maintains nextTickQueue and tickInfo objects for recording necessary tick information.

process._setupNextTick is another important method in src/node.js, it map to a C++ binding Function named SetupNextTick in src/node.cc. In this method, it take the first argument and set it the tick_callback_function as a Persistent

And snippet in SetupNextTick method from node.cc showed that env object will get a tick_callback_function passed from arguments to be the callback when current tick transmitting to next phrase.

I have added some logs to see what happened internally. Only know the callbacks run at the end phase of each event loop is not enough for me. At last I find that every AsyncWrap is a wrapper for async operations, the TimerWrap inherited from AsyncWrap. When timeout handler execute the callback OnTimeout, it actually execute the AsyncWrap::MakeCallback. You can see the same code showed before in the setTimeout section:

A dark day seems bright now, every stage in uv_run can be the last stage of event loop iteration, such like timeout, it check and execute the env()->tick_callback_function(). Another API setImmediate ended in the internal called node::MakeCallback, node does the same work. And the last part of StartNodeInstance, EmitBeforeExit(env) and EmitExit(env) will also call the node::MakeCallback to ensure the tick_callback_function can be called before process exit.

Not yet finished, coming soon…

Not yet finished, coming soon…

You can now take a quiz to test whether you have already understand the event loop in Node.js totally. It mainly contains user asynchronous code. Have a try.

When called setTimeout and setImmediate, it schedules the callback function as a task to be executed in next event loop iteration. But nextTick won’t. It will get called before current event loop iteration ended. Also we can foresee that if we called the nextTick recursively the timeout task have no chance to execute during such procedure.

Note: I am very lucky to have a bundle of guys as friends who know C++ very well, they teach me a lot and provide useful information.
Note: I am a Chinese as well, translating English is for exercise. If you want to refer my articles, please mark your own as refer from AceMood's Blog.
Recent Posts
Disclaimer
The views expressed on this blog are my personal views and do not reflect the views of my employer or campaigns I am supporting.